Carbon sinks and negative emissions play a limited but nevertheless indispensable role in achieving climate neutrality. In agriculture in particular, but also in specific industrial processes, residual GHG emissions will still remain in 2050. These emissions will be offset by removing CO2 from the atmosphere and subsequently storing it via CCS technology. On balance, Germany can become climate neutral.

Carbon sinks include natural sinks, such as carbon uptake by forests and soils, as well as so-called negative emissions via CCS technology, which are achieved by removing CO2 from the atmosphere and depositing it.

Natural carbon sinks include carbon sequestration from land use, land use change and forestry (LULUCF). These natural sinks absorb and store CO2, e.g. in trees in forests or in peat soils. If poorly managed, sinks can become GHG emission sources.

Negative emissions from the use of CCS-technologies are mainly achieved through biomass CCS, Direct Air Carbon Capture And Storage and the material binding of CO2 in green polymers. 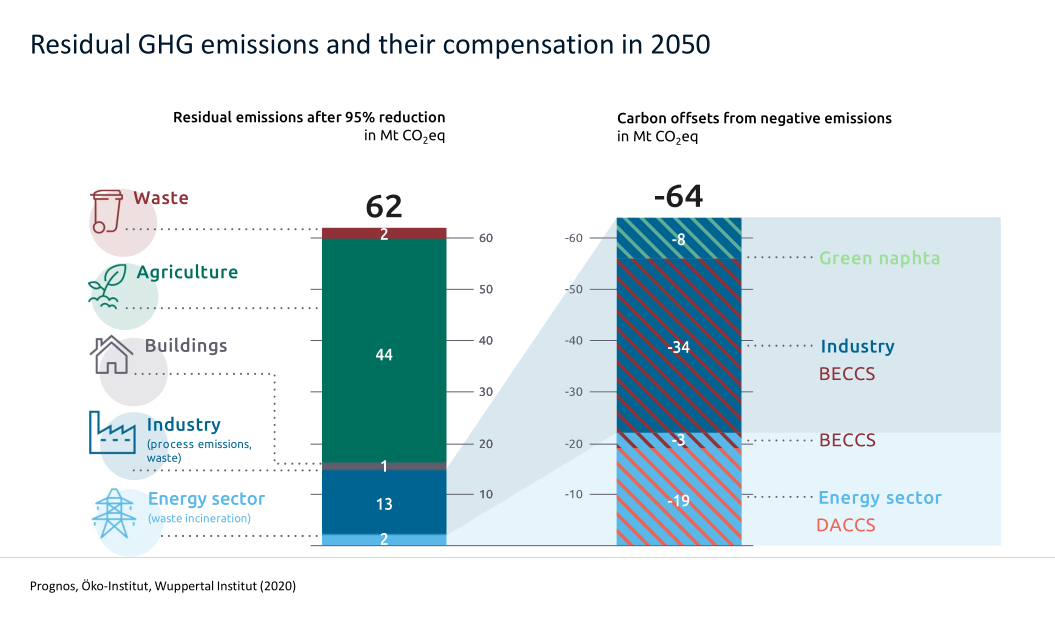 Industry will play an important role in the use of BECCS. Especially the high concentrated heat requirements of the steel and chemical industries are well suited for using biomass on a large scale and capturing the resulting CO2. The carbon can then be stored via the CO2 infrastructure needed for the cement industry anyway. The almost complete recycling of plastics, especially through chemical recycling, is a further important contribution of the industry to climate neutrality.

For CCS, infrastructure as well as spatial planning issues are of major importance. In the future, the availability of CO2 infrastructures and corresponding storage sites will be a central location requirement for several industrial sectors. We will need massive learning curve effects for the technology of extracting CO2 from the atmosphere.

Data and forecasts regarding natural sinks, i.e. the carbon uptake by forests and soils, are still very imprecise. In addition, due to climate change, forests and soils could threaten to turn into CO2 sources instead of sinks in the coming decades. Therefore, the contribution of natural sinks to climate neutrality is difficult to quantify and is not considered by us to achieve climate neutrality.

Residual GHG emissions and their compensation in 2050